Stud bolts are the most common fasteners in fluid transmission, therefore, they are used very frequently in Gas, oil and petrochemical and also water transmission pipes with flanges and industrial valves. Stud bolts are usually manufactured based on the American standard of ASTM A193 and in three different grades of B7, B8 and B16.
Stud bolts are threaded on both sides and are used with heavy nuts following the American standard of ASTM A194 and depending on the application and the environment condition are usually coated as Hot deep galvanized and dacromet.
Grade B7 and B16 stud bolts have relatively close application and material. However, Grade 16 is better prepared to work in very high temperature over 450 Degrees centigrade. Grade B8 of stud bolts consist of carbon steel in combination with chromium leading to stainless steel material. They are better suited for resistance against corrosion and abrasion, however, they can not resist as much tension and dont have as high strength and tensile of B7 and B8 stud bolts.

Stud Bolt A193 B8 Stainless steel

Stainless steel stud bolt B8 has 8-11 percent chromium in its chemical content and is highly corrosion and abrasion resistant. These stud bolts are fastened along with nuts of A194 G8 which are also stainless. Ajax bolt co is a manufacturer of stud bolt B8 up to 4 inches. 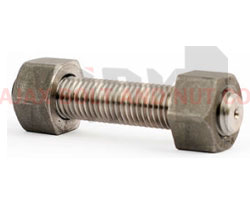 High strength and tensile Stud bolt A193 B16 , suitable to be assembled and used in very high temperatures slightly higher than 450 degrees centigrade. 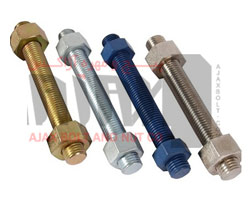 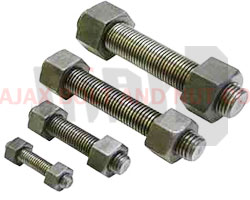